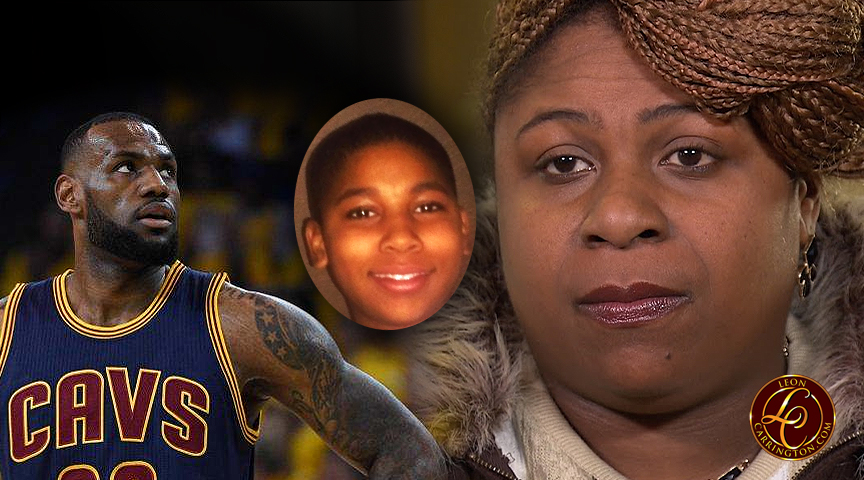 Samaria Rice, the mother of slain 12-year-old, Tamir Rice, has spoken out against the most popular athlete in sports, LeBron James, for his lack of comment regarding her son’s death.

Tamir Rice was shot by police officers November 22, 2014, after his toy pellet gun was mistaken for an actual weapon. On December 28, 2015, a grand jury chose not to indict the officers involved in the shooting, prompting an outcry from Cleveland citizens and also activists across the country, many of whom started the hashtag: #NoJusticeNoLebron, in an effort to encourage the Cleveland Cavaliers star to sit out games.

As the outcries grew louder and the hashtag spread like wildfire across the internet, James finally addressed the issue but didn’t offer much with his statement:

“For me, I’ve always been a guy who’s took pride in knowledge of every situation that I’ve ever spoke on,” James said last month, according to ESPN. “And to be honest, I haven’t really been on top of this issue. So it’s hard for me to comment. I understand that any lives that [are] lost, what we want more than anything is prayer and the best for the family, for anyone. But for me to comment on the situation, I don’t have enough knowledge about it.”

James went on to offer his condolences for the Rice family, but his lack of a stance on the issue, left many, including Tamir Rice’s mother, extremely disappointed.

“I think it’s quite sad that LeBron hasn’t spoken out about my son. I’m not asking him to sit out a game. I know his kids got to eat too, but you can at least put on a shirt or something. Some of the other athletes, some of them have said something, some of them haven’t. I think they should just make a statement. I’m not asking nobody to quit their job or anything, but make a statement for us black people out here.”

LeBron deserves to be criticized for this mess up.

If you recall, LeBron coordinated the Miami Heat team photo, in which all the players wore hoodies as a sign of solidarity for Trayvon Martin, after he was gunned down by George Zimmerman in 2012. Last year, LeBron was also one of many NBA players to wear an “I Can’t Breathe” shirt during warmups, prior to games.

Now, here is a situation where a young boy, near the age of LeBron’s own sons, was shot in cold-blood by police, in Cleveland at that. Yet, LeBron is trying to skate around the issue because he claims to have insufficient knowledge of the incident.

Insufficient knowledge of a national story that has sparked protests not only in Cleveland but also across the country, since Tamir’s death in 2014…

We all know LeBron is a major player in the growth and prosperity of Cleveland’s economy. Could it be that he’d like to remain neutral on this issue so as not to ruffle any feathers within powerful circles in his city?

You’re quick to comment on Eric Garner and Trayvon Martin’s deaths, LeBron, but your lack of stance on a young boy being murdered in your own city, sounds more like convenient politicking than insufficient knowledge. Don’t be spineless now. Where’s your backbone when the community really needs you? If you believe in something then you should be man enough to state your beliefs and not skirt around the issue just to save face. I’m just saying!

What are your thoughts? Do you think LeBron should say something or stay silent?