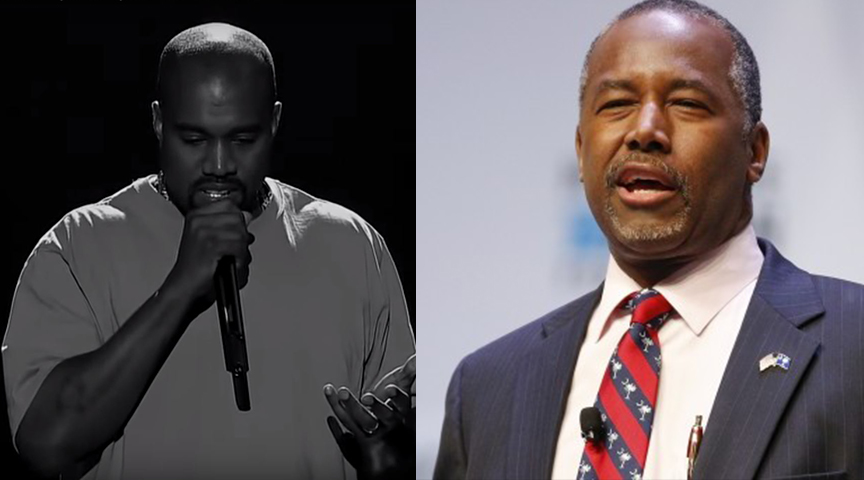 A few days ago, Kanye West had some complimentary things to say about Republican presidential candidate Ben Carson, in an interview with Vanity Fair:

[x_blockquote cite=”Kanye West” type=”center”]“When I run for president, I’d prefer not to run against someone. I would be like ‘I want to work with you.’ As soon as I heard [Ben] Carson speak, I tried for three weeks to get on the phone with him. I was like this is the most brilliant guy. And I think all the people running right now have something that each of the others needs. But the idea of this separation and this gladiator battle takes away from the main focus that the world needs help and the world needs all the people in a position of power or influence to come together.”[/x_blockquote]

While appearing on ABC’s This Week, Ben Carson returned the favor and actually gushed at the possibility of West running for office in 2020.

[x_blockquote cite=”Republican Ben Carson” type=”center”]“I did have an opportunity to talk with him. I was extremely impressed with his business acumen. He knows a lot about business. I talked to him about the possibility of maybe himself and some of the other people in pop culture doing some music that might be uplifting, that might give young women a sense of their value and young men a sense of responsibility. I think it could be a tremendous thing in our society.”[/x_blockquote]

This is bound to piss Donald Trump off as he does not appear to be attracting any minority support, which could be crucial for him to get the nod in the GOP race. In 2008, when President Barack Obama ran for office, he received support from rappers Jay-Z and Young Jeezy. Also, there was a loud call sent to the youth, who were fans of many artists who openly supported Obama, to get out and vote.

For retired neurosurgeon Ben Carson to get such open support from Kanye, it’ll be interesting to see if it helps his poll numbers.

How do you feel about Dr. Ben Carson? Would you vote for him if Kanye West was his running mate as Vice President?