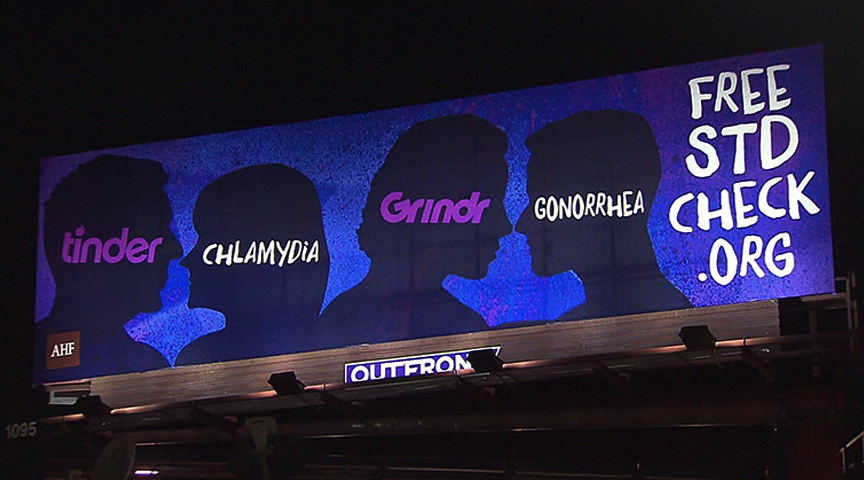 The Aids Healthcare Foundation (AHF) recently launched a campaign in Los Angeles that encourages users of the popular dating apps, Tinder and Grindr, to get regularly tested for sexually transmitted diseases, which has both companies in an uproar.

Tinder, upset with having their name plastered over the silhouette of two people leaning in to kiss, has sent a cease and desist letter to the AHF, claiming that the billboards make “false and disparaging statements against Tinder.”

AHF appears to be ignoring the letter, as there are currently 12 billboards and 45 public bus stop ads, throughout the Los Angeles area. Not to mention, the foundation plans on expanding the campaign to New York and Florida in the coming weeks.

[x_blockquote cite=”Michael Weinstein, president of AHF” type=”center”]“They’re tone deaf. It would have been much wiser for them to say that they’re concerned about their customers and look forward to working with us to help people get the checkups that they need. This would not have been the global story that it has become if they had not responded that way.”[/x_blockquote]

When you think about it, the AHF makes a valid point. Tinder and Grindr were created to encourage people to hookup. “Swipe right if you want to hookup with me, swipe left if you don’t.” Unless you’re dingbat crazy, chlamydia and gonorrhea aren’t laughing matters, and it was nice of the foundation not to put the words, “AIDS” or “HIV” on the advertisements.