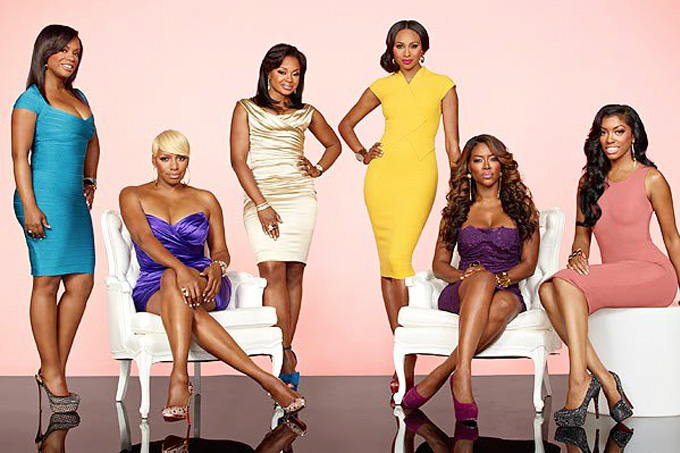 Without beating around the bush, we will get to the point immediately. Fists were fired for the first time at a housewives reunion and we were completely overwhelmed. We have waited a long time for this. When it actually happened, we had to allow it to sink in first. Here’s a recap of The Real Housewives of Atlanta Reunion (Season 6) Part 1.

Like usual, all ladies were dressed to outdo one another. Don’t expect us to fill you in on the details of their designer clothes. Anyways, we know Phaedra’s husband, Apollo, is currently under federal investigation for fraud. Well, Phaedra quickly jumped at the opportunity to mention her lack of involvement with Apollo’s alleged fraudulent activities. The self-pronounced southern bell sure looked as if she was hiding something. I guess we’ll never get the real truth unless Apollo comes out with a tell-all book.

Like usual, Nene came with her nasty attitude. Her hateful antics really dampened the mood in the room and left us wondering of her inclusion in the show. Let’s address the elephant in the room. Nene is anything but interesting anymore! Hollywood has definitely gone to her head, and she thinks she’s better than the rest of the cast. Remember the old Nene from previous seasons? She was so much more relatable and entertaining. People get a little fame and start acting like they’re “A” list Hollywood actresses. In the words of Nene, all we have to say on that is “boop”.

Like usual, the black female body was denigrated, with Kenya’s butt facing questionable calls about its authenticity.  A dance segment quickly followed, and Kenya revealed the secret to her happiness. She apparently takes everything as a compliment to keep herself happy; too smart to give a damn or too glam to understand?

The body language of the ladies reeked of awkwardness and lack of love for one another; lack of love for Kenya to be particular. She certainly didn’t impress anyone when she strangely recited the speech she had given on the beach in Mexico. She must have memorized the monologue by heart. Of course the other ladies thought she was just acting again.

So yeah, Nene’s double standards were highlighted. Andy also called her out on her comment about not wanting to work on Kandi’s play. Kenya was also targeted. A viewer called her out for criticizing Kandi’s body. Phaedra was asked if it was a Christian thing to call Kenya ‘a whore’. We were left confused when she said something about checking the Bible and her iPhone. If you didn’t understand the previous sentence, you now know how we felt about Phaedra’s response.

It only started to get better after Kenya’s Year in Review. Kenya started sobbing again with the mere mention of her dead dog, Velvet. Nene was in for a shock when she found out that she was the only one who hadn’t sent her condolences. Kenya’s invisible African prince boyfriend also did the rounds.  Nene was quick to put her views across, quashing Kenya’s Prince Boyfriend rumors. Porsha concurred and told Kenya that she knew of her payment to someone to play the role of the African Prince. Porsha even gave a figure, $15,000! Ouch!  Porsha then snatched Kenya’s scepter. To be fair to her, no one really likes being pointed at literally!

After those shots were fired towards Kenya, it was obvious that she had reached her boiling point. Out of the blue, she whipped out a megaphone!!! By now, both Kenya and Porsha were exchanging disses. Porsha threatened to shove the scepter up Kenya’s ass, to which, Kenya smartly rebutted “Spell scepter!”

So, basically, this is a dialogue summary of what lead up to the inevitable bust up,

Kenya: Phaedra and Porsha are just facing Karma right now. All those shitty things they’ve said about me before are catching up to them.

Porsha: I’m just sick of a grown woman playing the victim. She calls Kenya, “a slut from the 90’s who has a rotten vagina.”

And then, complete mayhem broke out. The ladies were on the floor and fighting. Soon enough, Kenya ran away from the scene while Nene stopped Porsha from speaking any further. After all, “it’s better to keep your mouth closed and let people think you are a fool than to open it and remove all doubt.”

Porsha explained that she blacked out during the entire incident and had no idea what happened. Give it to her to come up with an excuse! Kenya then started the “Fire Porsha” slogan.

Phew! How can you not tune in to catch part 2 after seeing all they mayhem?